Find out more about Tim Cannon.  Tim is Harrowden Turf’s newly appointed Production Manager for Feltwell read on to discover what plans he has to help drive the Company forward.

Tim Cannon is a relative newcomer to Harrowden Turf Ltd but he’s no stranger to turf growing.  Members of the Turfgrass Growers Association (TGA) and indeed many people in the landscape industry will know our Mr Cannon.  He’s been producing high quality turfgrass for the UK landscape industry for over 3 decades.  An awesome track record.

Tim Cannon: A History of Growing Turf and Growing Companies 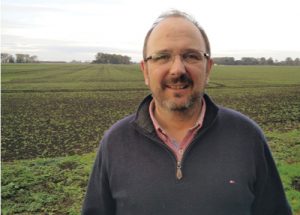 “I was originally a Lincolnshire farming tenant.  I diversified into turf in 1984 after a period farming in Australia and New Zealand Forest Services.” Says Tim. “We started out with just 2 hectares and a walk-behind Ryan turf lifter.  But we soon needed an automated Brouwer turf harvester when the hectares increased.  So I went along to see Turfland who had the distributorship at the time.  32 years late I am still growing turf but on a far bigger scale than I originally expected.”

Mixing and Merging – an interesting challenge

Tim joined Harrowden Turf in December 2015 along with the rest of the team at Spearhead Turf.  One year later, and following Colin Brown’s retirement, Tim has been tasked with merging the production and harvesting teams from Spearhead and  Q Lawns.

“Colin will be a hard act to follow” says Tim “But as the new kid on the block so to speak it’s easier for me to take an objective overview of situation.  There will be some changes to the way we do things going forward.  We’ll be building on Colin’s legacy to improve quality, service and our ability to meet customer expectations.  I have some incredibly skilled and experience people working with me and so far, the merger has run smoothly.  I’m feeling very positive about the year ahead and confident that turf buyers will benefit from the changes we’re implementing.”

One thing that Harrowden Turf Ltd is proud of is the way we try to care for the Environment.  Tim is working on some improvements in this department too.

One such improvement is to work with trade customers to get more pallets returned to the farm for re-use.  “A pallet isn’t just packaging” says Tim “It’s wood, from a tree and it shouldn’t be regarded as disposable.  With sensible handling, pallets can be re-used several times.  Not only does that save the farm (and ultimately the turf buyer) money, it is far more environmentally sustainable.”

Another of Tim’s changes is to the fertiliser regime.  Plants need food, there’s no denying that. But when applied wrongly, plant food can actually damage the environment by leaching into waterways and upsetting the ecological balance.

Going forward, Harrowden will be switching to a newly developed form of fertiliser which keeps nutrients in the soil until the plants are ready to use them.  This promises to be more efficient and more environmentally friendly.  Not least because the fertiliser crystals are actually created using waste water from urban areas.

Farm Manager Paul Addison will of course be continuing the conservation and environmental work on and around the Feltwell turf production unit.  And we look forward to sharing those developments with you too.

Going forward into 2017 as a single entity

With the successful merger of two production and harvesting teams and much closer relationships between the Feltwell and Southport units, Harrowden Turf Ltd is now visibly operating as a single organisation with satellite units in the East and the Northwest of the country.

“Going forward under Tim’s guidance, customers can look forward to continuing improvement in quality and service; “said Director Stuart Ridd-Jones “There’s also that reassurance that turf is grown with respect for the environment but I’m sure that what matters most to our trade customers is good communication and competitive prices.  Our newly centralised systems have improved efficiency for the benefit of customers and staff and will continue to do so for the foreseeable future.“

Meet the rest of the team