Biodiversity and Wildlife. Can they co-exist with turf production?

Harrowden Turf are keen to strike a balance between efficiency, value and biodiversity.  In this article we look at the measures being taken to create some sort of equilibrium.

Farming and agriculture have received a lot of bad press in the past few years.  Farmers have been censured over the decline in bee populations and songbird numbers. Yet the public want cheap food and lots of it.  And that calls for almost industrialised processes.

Turfgrass can hardly be called a food crop but the pressures on turf growers are similar to those on farmers.   The public want their landscaping to be cheap (green spaces are horribly undervalued in this country but that’s a whole other rant) and so turf needs to be produced as efficiently as possible.  Big fields, big machinery, every square metre of land must be productive.

How does that square with biodiversity?  After all, just like wheat, sugar beet and oilseed rape, turf is a monoculture with limited appeal for wildlife.

How do Harrowden promote biodiversity on their turf farms?

Here are just a few of the measures that Harrowden Turf take on their production units to support as many species as possible.

Our farms are criss-crossed with tracks and roads to allow machinery to travel between fields.  We manage these verges for wildlife.  Keeping some of the grass longer and allowing “weeds” to flourish.  At the same time some of the grass is mown short so that blackbirds and thrushes can forage at the edge of the road. 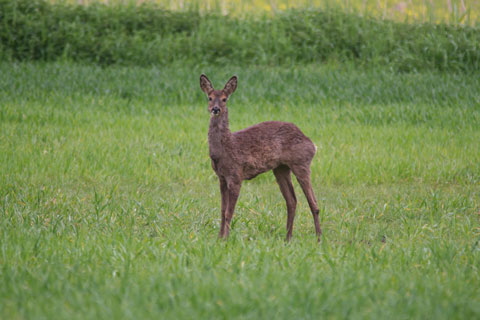 Three species of deer live on our Feltwell turf farm. This is a roe deer, we also see red deer and muntjacks

Harrowden has an ongoing and active policy of planting new hedges wherever possible.  We use native species such as hawthorn, blackthorn, guelder rose, dogwood and cob nut with holly and other evergreens.  This provides shelter for birds, insects and mammals.  Also plenty of spring blossom for bumblebees.  Birds nest in the hedges and we know that mice, shrews etc are using it because we see plenty of barn owls, kestrels and marsh harriers hunting around the farm.

Turf quality is impaired by badly drained land and so our production units are serviced by a network of interconnected drainage ditches.  We look upon these as upside down hedges.  They act as wildlife corridors and play host to toads, newts, grass snakes and the occasional otter.

The ditches (or dykes as they are known on the Norfolk farm) are immensely important to turf production and to wildlife and we manage them carefully. 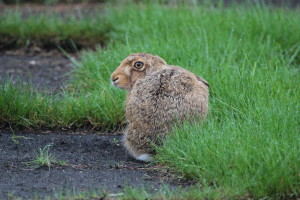 This hare was pictured grazing at the edge of a turf field. Hares like wide open spaces and are often seen on the turf fields

We can’t get enough of birds on our farms.   All around are nesting boxes for various species of bird and for bats.  Of course if we’re providing housing for our feathered friends we need to provide food too.  That’s why our hedges, ditches and road verges are full of the plant species that attract insects and/or provide seeds and berries for birds. 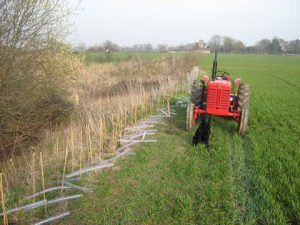 Some of our employees are kind enough to create and care for bird feeding stations around the farm.  Song birds have their diets supplemented all year round to keep them strong and prolific.

Some parts of the farm just can’t be ploughed.  Others were planted with trees many years ago to protect crops against strong winds.  Here’s a piece of trivia for you — the shelter belts were originally intended to be a crop in their own right.  Poplar trees were planted in the 1940’s and 50’s on behalf of a well-known matchstick producer.

We still manage those woodlands with care.  They are home to a wide range of animals and insects.  Including (unfortunately) badgers who do untold damage to crops but cannot be controlled.

Not every field on every one of Harrowden’s turf production units is growing turf.  On our farm in Feltwell, Norfolk we also grow Meadowmat wild flower mat and Enviromat sedum matting.  Those two products are the ultimate in wildlife conservation.  They provide food and shelter for pollinators and for beneficial insects.  What’s more, the marketing and PR around them is all about education and encouraging others to embrace biodiversity.

Nesting boxes are placed on buildings and trees wherever possible. This blue-tit nest box is on the outside of our Feltwell office

A controversial subject for some but for us countryside dwellers, game rearing and conservation go hand in hand.  The gamekeeper pays a small fee for the right to keep his ducks and pheasants on our land and to walk over the fields during the shooting season.  A big part of caring for game birds involves caring for their environment.  That means making sure there are enough wild insects for them to forage on; growing biodiverse cover crops to shelter them and offering supplementary feeds – most of which get eaten by other birds.

Contrary to popular belief, predators are not massacred.  Instead the game birds (and their visitors) are protected by fences and a novel technique.  Guinea Fowl are kept alongside the game birds.  When a predator approaches the guinea fowl make such a racket the predator gets spooked and runs off.  The fee from the gamekeeper is invested in farm conservation.  So it’s a win-win situation.

At Harrowden Turf Ltd we do our best to make sure wildlife is respected and cared for in every way possible.  Judging by some of the photographs in this blog and on our Facebook page, things are going OK.

What do you think?

Have your say in the comments box below.

More articles about environment and biodiversity